THE ETYMOLOGY OF CHINESE HIEROGLYPHS

It is not a secret for learners of Chinese that the Chinese written language is unique in the modern world of alphabets. In place of letters there evolved thousands of complex signs – hieroglyph that denote morphemes and words. Even though the Korean and Japanese systems have similar hieroglyphs, they differ from the Chinese one as their elements can only function as phonetic elements. Being only one of logographic scripts, Chinese remains the main system for millions of people.

The first recognized type of the Chinese written system appeared 3500 years ago, but many people argue that that was an far earlier script.

Scholars agree that the Chinese written language originates from an ancient non-linguistic symbolic system. During the late Neolith period (the second half of III century B.C.) people started to draw symbols or “pictograms” on ceramics and nephritis. These symbols might denote their owners in the family or clan.

Though these pictograms are not officially Chinese hieroglyphs, they are slightly similar to their earliest variants. For example, a bird with the solar symbol was often drawn on bronze artefacts in a clan’s name of the Shang dynasty. Many people think that at some point these signs stopped denoting objects and made words which denoted these objects. In other words, the signs acquired a linguistic meaning and became logograms. It might have happened when the signs were carved on clay crockery, which proves the existence of the written language at that period. But it is rather difficult to give evidence.

The period of the dynasty Shang witnessed the appearance of symbols written on animal bones and tortoise shells that were used for fortune telling in 1500-1000 B.C. After the signs were drawn, bones were heated until cracks appeared. The patterns of cracks were used to predict the future: 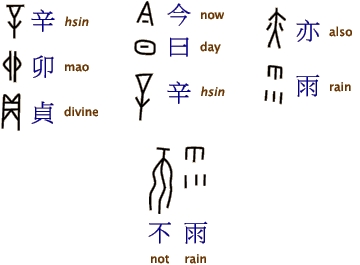 The word-for-word translation is as follows: “On this day we predict that it is going or it is not going to rain”.

Another common characteristic of the Chinese writing system is a rebus which implies using the meaning of one word to write another word that sound similar. The table gives several sounds which are used to denote several words: 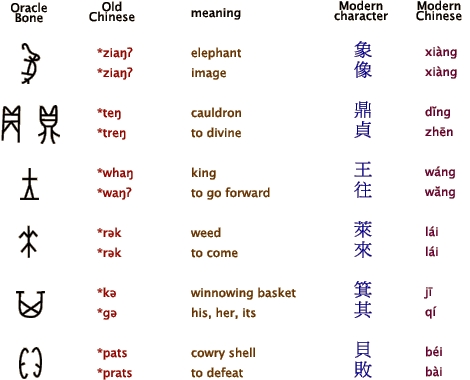 In the above examples each sign denotes 2 different words. The first word is the original meaning of the word, the second word is represented by this word because it sounds like the first one.

The old Chinese written system is characterized by polysemy when the same sign denotes two words that sound different but have similar meanings: 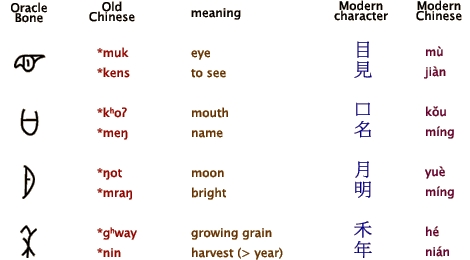 Polysemantic signs could cause the wrong interpretation of texts. That is why copyists started to add other symbols – semantic indicators (determiners) that provided a rough or related meaning: 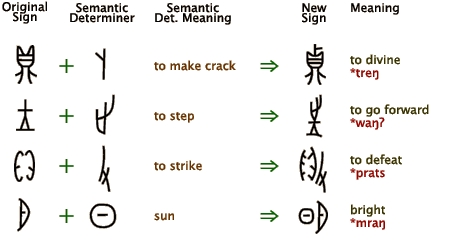 For example, the determiner “to make a crack (fortune telling)” and the symbol either for “cauldron” or “divine” make the new sign “divine”. The older sign is used only for ‘a cauldron” now.

Another way of adding distinguishing features is the use of phonetic meanings which mean the same but sound different. These meanings are called "phonetic complements" since they determine the pronunciation of a word and help the reader to see the difference between the meanings:

In the above examples the sing for “growing grain” is also used for “a harverst”. If we add the phonetic symbol *nin, the new sign means only ‘a harverst’. The original sign still means “growing grain”.

After the early evolution under the dynasty Han the Chinese writing system kept developing. The visual images became more linear and stylized and bore less resemblance to the objects of nature.

The Xiaozhuan period (小篆, алый Устав) gave birth to the traditional writing system in the form that exists today – they started to regularly use radicals. Nowadays this style is used in calligraphy and printing.

About in 500 B. C. saw the Lishu style (隶书), or the official style that was used by government officials. The style was widespread during the Qin (221-207 B. C.) and Han dynasties (206-220 B. C.). The hieroglyphs had fewer and smoother lines and were standardized, which caused the disappearance of regional differences. As a result, this writing system is identical to the modern one.

Nowadays there are more than 100,000 Chinese hieroglyphs, but they include obsolete and specific hieroglyphs.

Despite the old origin and different changes, the Chinese writing system has maintained its historic peculiarities and reflects rich cultural background of the Chinese. It continues to develop and become simpler, borrowing words from other languages. The Chinese language attracts a lot of foreigners who admire the culture and traditions of great and mysterious China.

If you are interested in this unique language and looking for professional courses of Chinese, please sign up for a trial lesson.

Online teachers of Chinese at Skype-Language.com are always ready to help you!

2019.07.17 GET YOUR TICKETS TO MIDDLE KINGDOM, OR REMEDY AGAINST YOUR FEARS For many people studying Chinese is strongly connected with their hope to visit China one day. And it doesn't really matter if this venture will be solely touristic or a more educational one. But as ...

2019.07.09 Ingenius mistakes, or a guide on how to write hieroglyphs properly We can’t argue with the fact that hieroglyphics is the cornerstone of Chinese language learning. The whole set of skills is necessary to recognise new hieroglyphs correctly, such as reading, ...
More articles
Order a trial lesson