FIGURE ME OUT: Chinese hieroglyphic riddles

'If you put two dots, you will get some gold'.

Well, it's not the quickest or some mysterious way to get rich. It's a translation of a Chinese hieroglyphic riddle (字谜; zìmí).  In the original it looks like 点点成金. The last character , in one of its meanings, is 'gold' (金). And in order to deal with this puzzle, we have to remove these two specks from the 'answer', and people who posses necessary knowledge about the Chinese language, will immediately be able to say that the answer is the character 全 (quán; full / complete). And here it is, a simple way to get 'gold' from 'fullness'.

Someone might think that riddles are only needed to entertain children. It's actually far from the truth, especially when it comes to learning a foreign language. In a broad sense, 'a riddle' is one of the oldest folklore genres and , as a results, one of the oldest ways to describe and explain the outside world. For representatives of other cultures, such language puzzles can act as a pass into a different associative environment.

Nevertheless, let's not get ahead of ourselves too much and first have a look at a few examples of such hieroglyphic tricks saved for us by the Chinese language with much care.

I guess, it's going to be best to start our overview with riddles which are closest in their structure to Russian ones. All Russians remember from the early age adults saying: 'you can see a hanging pear , which is not for eating there!". How much we all tried to be witty and smart , and came up with ideas that it was a boxing bag, some tried to swallow sources of light… and in this matter the Chinese aren't that different from us: the way of "describing the meaning' is quite common there, too.(写义法; xiěyìfǎ).

Here is an example of translation of such a riddle: 'five brothers, born together, all made of flesh and bones, but with different length'  (五个兄弟,生在一起, 有骨有肉 , 长短不齐). Of course, there is a rhyme in the Chinese version, but you really don't have to be an expert in Chinese to guess the implied object. You probably have already understood that it's 'a hand': (手),  I think it's going to be easy for the majority of children.

Here is a little more difficult example of metaphoric strategy in asking riddles: 'Each family has at least one, but there just a few hundreds in the whole country' (一家至少有一个; 全国一共才几百). To solve this one, you need to have at least minimal knowledge about some features of population in PRC, where , according to the official listings, there are just a few hundreds births for an almost two billion population. The ones aware of this peculiarity will easily guess the answer : 'last name' (姓).

Having satisfied our ego, let's move away from familiar stuff, and try finding out what the distinctiveness of 'traditionally Chinese riddles' is. Neither the first, nor the second one were riddles in the full sense. They only required  some gumption , but not knowledge of Mandarin (the official name of the language in PRC). Nevertheless, Chinese riddles related to the forms of the used characters have been  quite common at least from the 9th century A.D. Even back then for the ability to 'knit words ' one could get nothing less than a prize and respect from the Emperor himself. From those times, people's ingenuity has kept living through promised riches, and through dynasty courts.

Perhaps the most useful way for learners at the beginning level will be "description through strokes" (笔划交待法; bǐhuàjiāodàifǎ).   As a rule, wording of the question itself should prompt a decryptor to the correct movements of a brush and simultaneously  teach character writing.  The text to confirm it : 'the hieroglyph has six strokes and all of them are sloping' (一字有六笔，笔笔是斜的). Six inclined strokes written one after another give us the hieroglyph 众 (zhòng; crowd).  Any character can be 'additionally encoded' in a similar manner which adds interactivity into a language  learning process.

All the above ways of making riddles were just a starter to the main delicacy on the table of Chinese riddles. The next way we will look at is 'transferring the meaning though characters ' (借字法; jièzìfǎ). There are a lot of varieties, ways, types and subtypes. We are going to get to the point instead of clogging the text with unnecessary classifications.

In my opinion, it's the most difficult and yet the most exciting way of making riddles since it is directly connected with the hieroglyphic vocabulary. In order to understand  which one out of the whole variety of Chinese characters is implied, it's necessary to imagine all components of the answer-character.

Let's start with something relatively simple: 'one dog, four mouths' (一狗四口). If one doesn't know that there is at least one more hieroglyph for 'a dog'— 犬 (quǎn), they might never reach the desired  器 (qì). The same with the necessity to know about the hieroglyph  念 (niàn;  think, recall, recite) in order to understand what the phrase 'cut the head off the character 'read'' means. It's not hard to guess that there are a lot of hieroglyphs which mean 'reading' in Chinese. In this particular case the answer is the hieroglyph   心 (xīn; heart).

'There are eleven mouths in one family' (一家十一口): if you compare this riddle with the one about 'last name', you are going to need a completely different graphic algorithm here. Having written consequently hieroglyphs 十, 一 и 口 from top to bottom, we will get the desired answer:  吉 the character which isn't really related to 'a family'.

Similar situation with the phrase 'Neither on the top, nor on the bottom' (不上不下), in which the Chinese version is already a hint. 'Glued' together the characters  上 and 下  make a more complex hieroglyph 卡. The solution was quite simple.

Finally, I must tell you about my favourite riddles. The first one sounds rather comically:'This is not a car' (不是车). It looks like anything can be the right answer expect for the 'car'. But here one is required to remember that there is a huge number of ways to write 'not' in Chinese: 莫, 无, 未, 勿… we are interested in a not very extravagant 非: its 'collaboration' with the 'carriage' (车) will bring us to the answer — 辈. Those of you who are tired of having no connections related to the meaning or words, or if someone all of a sudden thinks there are incredibly good at finding answers, try decoding this phrase: 自大一点 (literally: a little prouder).

Frankly speaking, in terms of riddles Chinese opens up the great abyss of difficulty and variety. There are charades written as one hieroglyph (亘 = 三口 = 品), and there are also quite tricky combinations (八哥学舌 = 言八兄 = 说): they can't be solved in a swoop. And at some stage, it started to seem like a different sphere of Chinese separated from the rest of the world. But as it always happens, I suddenly found a photo , and not of just some random place, but of the most famous mountain of China - Taishan (泰山): 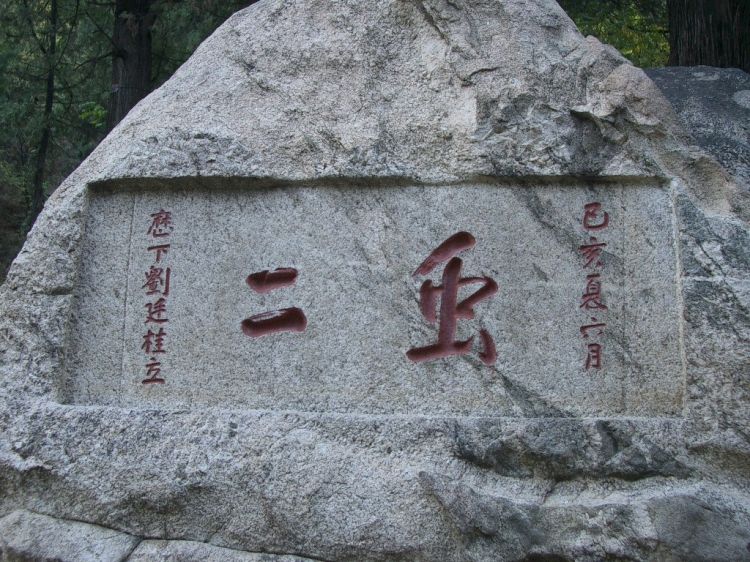 And what do we see written on it?  A real Chinese riddle! Here is the way to unravel it: common hieroglyph  风 can also be written as 風, and apart from 'wind' it can mean 'scenery'. In the photo it is kind of deprived of two 'frames' - the direction is both in the character and in the previous number two  (二). So the message on the stone can be understood as 'scenery without limits' and 'great scenery no matter where you look'.

Moreover, Chinese comic crosstalk (相声) is full of hieroglyphic jokes. Thanks to the witty minds of performers the character 丛 (cóng; cup) becomes 'a double bed' (just to remind,  人 means 'a person'). Ans such quite simple examples just make me more confident about the idea that the language is the way to understand a foreign culture well enough. And isn't it great that Chinese disposses to word games!

On a more serious side, even if you don't have a super mission to acquire Mandarin, solving riddles is a great linguistic exercise training your thinking (they are just as good for activating your brain as sudoku or playing solitaire). For me riddles have always been not just a motivation to comprehend the language more and more, but also a nice 'side effect ' from peculiarities of Chinese writing. I wish everyone who got into this 'riddly topic' to go all the way from just someone who solves riddles to the one creating them!

«It's on the top but it's small - don't look down at it; in a family he is definitely older» (上而又小，别小看它，若论辈份，准比你大)

Everyone who has reached this place I give two bodies stuck between an inch and speech, or put simply, thank you!

(My own translation and  encryption of the word  谢谢)

2020.09.17 17 books to read in Italian Even if you are a great supporter of modern technology, you shouldn't discard good old reading when learning Italian. And here are the reasons why you should read: It broadens your vocabulary ...
More articles
Order a trial lesson